There was an ice storm here in my neighborhood this weekend. Ever since my accident a few years ago, the one where I totaled my SRX, (see picture below) driving in less than ideal conditions is hard for me.

Especially now that I drive a little Insight. I won't do as well in Bluebell (yes, I name my car...don't you?) as I did in Violet. So, I stayed in the house all weekend. Didn't even go out to get groceries. 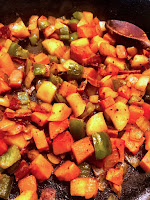 I was busy in the kitchen, cooking and baking. Even though my depression has impacted many other aspects of my life, those two things usually bring me comfort. When they don't, it's cereal and toast and no posts on Instagram or Facebook with pictures of something yummy. It's a good gauge of how I'm doing; if there are postings, I'm at least taking care of my stomach.

I whipped up several things this weekend. The first thing I made was a hash. Or home-fries if you like that better. I took one sweet potato, one green pepper, one onion and one honey crisp apple. Diced and sauteed them in a little olive oil, along with a couple of pieces of chopped cooked bacon, some salt, pepper, and, for something different, some turmeric. It was so good! The apples added just the right touch of sweetness to the savory onions and peppers. 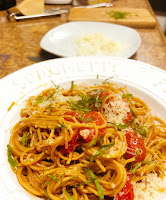 Though I didn't take any photos of it, for dinner Friday night I made my favorite: Pasta Pomodoro.(I posted this picture from another time) I heat up a little olive oil. Sprinkle some crushed red peppers and freshly ground black pepper into the oil. I then add some cherry tomatoes. While they are cooking down, I boil some pasta, usually angel hair, and then toss the pasta into the pan with the cherry tomatoes. I add a little pasta water,and then off the heat I add some parmesan cheese and fresh basil. Super easy and so delicious!

While looking though Instagram, I came across a recipe from Ina Garten for a Dark Chocolate Tart that looked so good, I got up and gathered the ingredients to make it. I added a small amount of orange oil because I love the flavors of chocolate and orange together. It was simple to put together. No real cooking.It does have to be baked, but nothing on the stove. 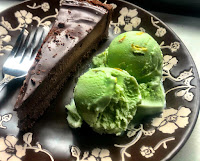 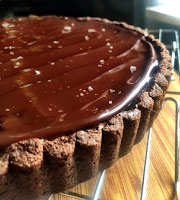 A graham cracker crust, a chocolate ganache with eggs. Less than 30 minutes total baking time. It's super rich and creamy. Very decadent and perfect for Valentine's Day. And, with a little pistachio gelato on the side, it was heavenly.

I think I mentioned that I noticed recently a lot of the spices used in Indian cooking are ones I know and like. The last time I was in the grocery store I noticed a bottle of Garam Marsala spice blend and picked it up. I decided to try it out on some vegetables. 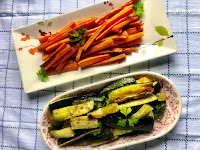 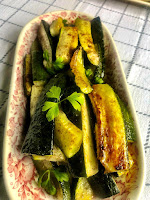 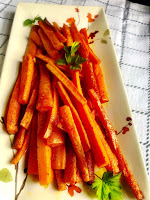 Zucchini and carrots. I cut them into strips and drizzled them with olive oil. I sprinkled everything with the spice blend and roasted them in a 425 degree oven for about 20 minutes. The aroma of them baking was maddening. The carrots were especially delicious, the warm spices complimenting their sweetness. The was a subtle heat on the backside which was very nice. Cinnamon maybe?

I don't eat much red meat, but every once in a while I love a good burger. This weekend was one of those times.

I caramelized an onion, grated some Gruyere cheese, made a spicy aioli, grabbed some dill pickles, sliced up a tomato and used all those goodies to top a burger I cooked up in my cast iron skillet. That was dinner. Nothing else. 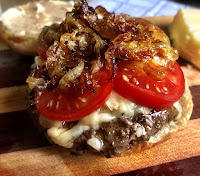 Just the burger topped with all those goodies. The sweetness of the tomatoes went well with the richness of the cheese. A couple of dill pickles added the perfect amount of acidy. It was so satisfying.

I watched a couple of episodes of "Good Eats, Reloaded"this weekend. One of the episodes had a recipe for an overnight oatmeal. It was another of those recipes that looked so good to me that I got up and gathered the ingredients to make it. Oatmeal, flax meal, chia seeds, cranberries, cinnamon, salt, almond milk, coconut milk, maple syrup and vanilla. I placed everything into my canning jars and placed them into the refrigerator for breakfast. 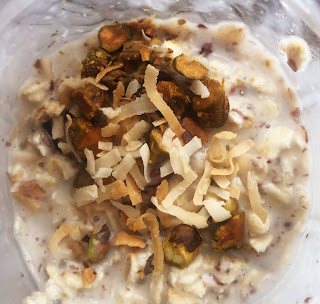 This morning I took out one of the jars, heated it in the microwave for about 90 seconds, sprinkled on some toasted coconut and chopped pistachios and dug in. This will be a recipe I go to over and over, The tartness from the cranberries. The creaminess of the oats. Not overly sweet. Crunch from the nuts. A perfect was to start my day!

I cleaned my house today. Started by sweeping the kitchen floor. Asked Alexa to play some music to clean house to. And, slowly went from room to room. So what, you might say, but it's been months since I cleaned. I have kept my stove, sink and countertop (fairly) clean, but the rest of the house has been ignored. I had not been able to motivate myself. I haven't cared. No one is coming to my house. I'm alone here. Who cares? And, I've been struggling with that. Part of me hating how things looked. Part of me that didn't care. Why share this? Because there might be someone else out there feeling the same. Not being able to do those every day or every week things that make up life. Not cleaning. Not keeping in touch with people. Not taking care of yourself.Thinking it won't change.  Don't give up. I've been there. I struggle to stay atop my depression and sometimes I can, and there are many other times I can't. Sometimes caring about anything is just too much effort. For me, it's best described as a wave or maybe a roller coaster. I know, if I hang on long enough, that there will be an upswing. I'm sharing this to say "hang on". That tomorrow could be the start of that upswing. Give yourself credit for getting up. For putting on any clothes. For eating anything.

Life is hard. Give yourself time.

Scenes from the weekend

I’m pretty lucky I think. I own my home outright, so I don’t have to worry about a mortgage payment.I do still have to work, at least for another year or two. But, because I own my home, and because my boss approved it, I can work a four day work week and enjoy a  three day weekend, every weekend. Before the pandemic, I was out and about for most of the weekend. These days I’m seldom out and about. Most of the time I am at home. 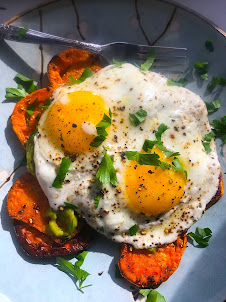 Being home means I have time to cook and bake and most weekends that’s exactly what I’m doing. This weekend was no exception. 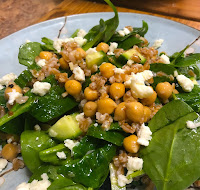 Friday I made a delicious breakfast of roasted sweet potatoes, mashed avocado and sunny-side up eggs. Lunch was a delicious salad made with farro, spinach, chickpeas, cucumbers and feta cheese. Dinner? Lentil soup with celery, onions, carrots and tomatoes. 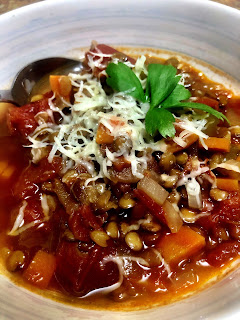 Saturday was more baking, less cooking. I made a Polenta Apricot Pudding cake and a pan of Polenta Honey cake. I also took half a tube of sugar cookie dough, added some chopped pistachios and dried cherries and attempted to bake cookie sticks. The sticks spread so I have oblong cookies instead. Not as attractive as I had pictured in my head, but still delicious. 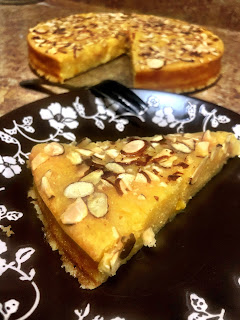 The Honey polenta cake I use for one of my favorite snacks. I grill the cake and then top it with sliced, fresh pears, Greek yogurt and a drizzle of honey.

Yesterday I made breakfast for dinner in the form of a delicious pumpkin oatmeal. It’s a recipe from Aarti Sequeira. I caught it on an episode of her show "Aarti Party". The recipe turned out well, super easy to make and worth looking up and trying. I hadn't realized Indian cooking used so many spices that I know and love. I have earmarked several recipes I want to try. Watch this space for Indian recipes in the future! 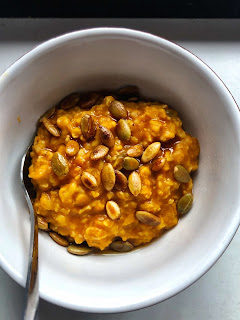 The last cooking for the weekend I did was just a little bit ago. I roasted some Brussels sprouts with a little salt, pepper and olive oil. I love roasted veggies of all kinds. I often roast some and use them as meal prep. Last week it was carrots. My dinner this morning was homefries made with red potatoes cooked in a cast iron pan with onions, green pepper and some chopped bacon. Then, to go with the homefries, I sautéed some shallots, tossed in some spinach and then added a couple of beaten eggs and cooked that all together.Topped with a few pieces of feta cheese. Not very pretty, but quite satisfying. Some red grapefruit was perfect for cutting the richness of the dish. And that was pretty much my weekend. Did a little cooking. Cleaned up the mess made doing said cooking. Repeated the whole thing again. Very relaxing. Very peaceful. Also very productive because most things I cook or bake make multiple servings, and I freeze the extra into portions for my meals at work. It's a "win-win" situation.

Susan
I am an upstate NY girl who ended up in Virginia. I used to live in the country, on 11 acres with a hubby that I was married to for 26 years. I changed all that and now live near a lake with a cat named Shelob. I have two children, two grandchildren and two furry grandpets. :) I love baking, cooking, and being outdoors. I love to travel and take photographs. I am finally at a place in my life that brings me peace and happiness. I am blessed.

I love hearing from people. Please feel free to email me with any comments, suggestions or observations at mgdsue02@gmail.com